It would be a nightmare for a blogger whether professional or like me(I don’t know whether any other category of bloggers exist in this world) for not updating his/her blog for the past six months.

Unfortunately,my nightmare came to reality because in the last six months I use to visit my blog like any of my least frequent visitor.

Although in such an exaggerated world of blogging where my blog is almost oblivion, values me the maximum.

I started working with a software company which intentionally occupied me with some tests and many more attempts of those same tests. Consequently , it was difficult to write for me as I was surrounded by classes , constructors , interface and assorted tiers of the JAVA. It was like Miss Pandora opened her box and strike on me with JAVA, in the scenario when my general awareness with this word was restricted to the island of Indonesia. 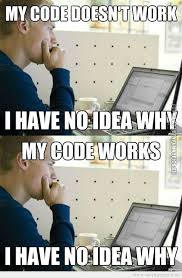 From the past six months experience of JAVA, I concluded that JAVA developers or the so called engineers like me who deals with JAVA or the people who think JAVA has a good scope and conclusively studies JAVA are the most depressed people.

I can actually configure JAVA affected people because their class of life doesn’t implements the ENJOYMENT interface or may be the interface does not have the by default abstract method of coolness or may be the constructor in the class of life has parameterized constructor and inadvertently it’s instance variable is initialized as “DEPRESSED”.JAVA affected people gets an adrenaline rush of JAVA and intoxicates every article with this word.

Anyhow my training completes with a happy ending actually beginning on the other part.

the embers of earlier fires shall duly flame again…

With this my blog is back, my fans in some other universe{because I don’t find them here} would be restless, dying and anxiously waiting for my updates and I am absolutely happy with this.

Hi. I am Shefali Arora, a software engineer by profession and a blogger by choice.You can read,write,share and comment on my blog.Thanks for stopping by.Keep visiting.:))

A Software engineer by profession and a blogger by choice.. You can read,write and comment on my blog.. hope you enjoy.Keep visiting:)))))))))))

Light at the end of the Tunnel

We Lead The World of Language

Just a small town girl who writes about Christian stuff.

Visas and Travel on an Indian Passport

I am a compulsive traveler on a life-mission to visit every country on Earth. This blog is a journal of my experiences. I hope to share anecdotes, photos and useful information (like visa procedures!). If you want to contact me, please follow me on twitter: @insertindian.

My life in India as a white, American bride .. with an Indian groom

Kshetra Puranas and Other stories

writes one short story every week

And At Last I See The Light

This WordPress.com site is the bee's knees